The Madison Scouts were recently presented with an artifact from the World Trade Center in recognition of their 2011 production “New York Morning”. Presented by Kenneth Job, Vice President of Job and Job (a New Jersey engineering firm), the artifact is a vial of metal remnants from World Trade Center beam C126, recovered after the events of September 11, 2001.

The C126 beam is being used in the construction of a memorial located in Hasbrouck Heights, NJ, just 10 miles from the World Trade Center site. Through special permission of various agencies, Kenneth was able to present this artifact to the corps to include in its historical archives.

“It’s an incredible gesture,” stated Scouts Executive Director Chris Komnick. “We are honored to be the recipient of the gift and it will become an important part of our 2011 historical archives.”

“The members of the 2011 Madison Scouts were given a very special show to perform and night after night they delivered it with incredible emotion and respect,” said Komnick. “It clearly had impact on many who experienced those performances, especially our fans on the East coast. It was a privileged to present this show on the 10 year anniversary of 9/11.”

Following is the letter presented to the Scouts along with photos of the C126 beam and subsequent artifacts. 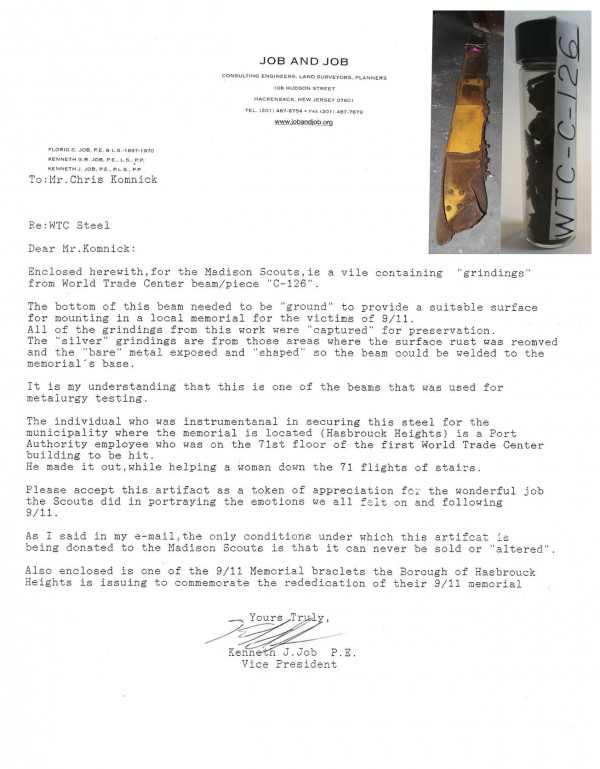